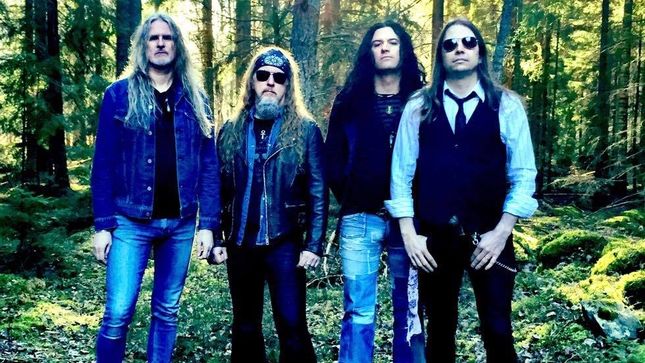 The new The Quill album, “Born From Fire”, amazed us! We are so excited that the Sweds returned with such a good album, where you can listen to Magnus Ekwall’s vocals again. Myth of Rock was obliged to get in contact with the band for a nice chat, so Antonis Mantzavinos spoke with Roger Nilsson (The Quill’s bassist). Continue reading, you will find everything very interesting!

Hello Roger, we would like to welcome you to our online music magazine, Myth of Rock! We are very pleased with the new The Quill record and we believe it is a really good album which will hopefully be appreciated by hard rock fans. Based on the new release, we would kindly like to ask you a few questions, so that our online readers could get more easily informed about you, the band, and of course the new record. First of all, we would like to ask a few things about the conception of this new record, the recordings, where/when was it recorded etc.

The album was recorded in two different sessions about six months apart. We recorded it in the same studio as the last time, a place called 491 Studios. It’s located just where we live so it’s really convenient and cost-effective. It’s also really nice to be able to go home and sleep in your own bed after a full day in the studio. In the earlier days we usually recorded far from home and stayed in the studio for weeks. Recording away from home is good in that it keeps you focused on the recording but you tend to lose some healthy distance from it all.

Give us some hints about the album title and the awesome cover.

Album titles are always tricky. Usually we start looking at the song-titles trying to find something there. This time we didn’t find anything that felt really good. So the next step was looking at the lyrics. There’s a line in Electrical Son – “Born from the fire – I am the Electrical son”. Somehow Born from fire made sense to us, sort of Phoenix rising from the ashes. So that’s how it all came about. The cover-art more or less was born the same way. I’ve been a fan of Sebastian Jerke who did the artwork and I really loved his cover for Rise about the meadow by Greenleaf – so he was really our first choice. He was up for doing it and we sent him some songs and all the lyrics. He then had the idea to incorporate different parts of the lyrics into the painting. So the music, lyrics and artwork are all connected.

What do you think about the comeback of Magnus Ekwall (vocals) to the band and how did that happen?

I think is a real blessing to be able to still work together 22 years after our first album. Not many bands last for so many years. We were more or less kids when we stared out so we’ve grown up together going thru various stages of life. And it all came together very naturally. A mutual friend of ours where having a private party and wanted a band to play some Kiss-covers. He asked the four of us to do it but unfortunately Jolle was booked elsewhere. But we decided to do the gig anyway with Magnus’ son playing the drums just for the fun of it. Once we did that show it was a natural step to just meet up and see if there might be some spark left between us. Me, Christian and Jolle had been more or less drifting along doing nothing for a year or so it seemed like a good idea to just start jamming together. And from there on it all came together very quick. In fact it felt like the 12 years apart never happened.

What was your contribution on writing this record?

Some small bits and pieces here and there, but Jolle and Christian are the two main writers when it comes to the music. They usually bring in an idea and then we all work on it together  adding a part here and there ‘til we’re all satisfied. Magnus writes most of the melodies and all of the lyrics. But it’s really a group-effort. Everything is arranged in the rehearsal-room as a real band sweating it out.

I would musically place the album, in regards to its sound and feeling, in between “Voodoo Caravan” and “Hooray! It's a Death Trip” Do you think this record is a step back or a new effort, with new elements, new approach and the beginning of a new ear for the band?

We just wrote whatever came to us, so there really wasn’t any conscious effort to sound like in the old days. But with that being said Silver Haze was the album we talked about as the bar. Maybe not so much for its sound or songwriting but more for the energy and the state we were in when we recorded it back in '98.

Will the band tour for the promotion of the record? Any shows already planned?

We’ll certainly try to play as much as possible, we just have to plan it really well since we’re all involved in other bands, have family and daytime jobs. Performing songs on stage is really were they come alive and take on a second life. 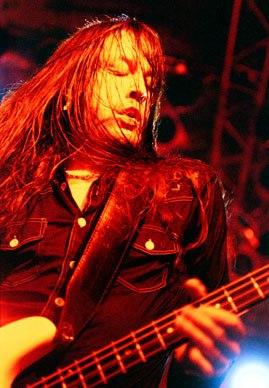 And a few personal questions! We know that you Roger have played and toured also with Spiritual Beggars, Arch Enemy, Firebird. What other musical projects/bands are you involved with?

During my years away from The Quill I played a lot as a guns-for-hire type of guy doing just about everything with everyone. I played covers, doing sessions and also where involved with a few bands playing original material. I did two albums in Swedish with a band called Henrik Björkman & Paj Malaj. The idea when I left The Quill in 2005 was to play a little bit less than the previous years but in the end I played even more…:D Me and a drummer I played a lot with during these years counted that we performed 140 unique songs on stage together in one month. Crazy!

How you could describe a regular day or week in Roger Nilsson’s day, apart from touring, recording and album and being active with a band?

Just regular everyday-Joe things. I work as assistant principal living in a small town in Sweden so my days are full. I have a wife and two daughters 12 and 16 years old. I live in a nice old house which needs a lot of care. I also try to work out 3 times a week either running or mountain-biking. Not so rock n’ roll at all :D

Who are the artists that have shaped you musically and been your primary inspirational figures as a musician?

It all started with ABBA, when I was really young. You couldn’t really avoid them growing up in Sweden in the 70’s.  Then when I was about 8 or 9 a friend introduced me to Kiss and that was the big game-changer for me. It’s a band I still follow and listen to a lot. Next big thing was discovering the big three - Black Sabbath, Deep Purple and Led Zeppelin. My father had lots and lots of tapes and from time to time I would sit down and discover new music thru these tapes.  Remember finding "Gallows Pole" and "Black Night" on one tape and immediately there was something about the sound that I loved.

Kiss, Black Sabbath, Led Zeppelin, Deep Purple and Black Crowes. Narrowing it down to 5 records is almost impossible, so I’ll add a few extra ones! Kiss – "Dressed to Kill" and "Alive", Captain Beyond – "Captain Beyond", Deep Purple – "Made in Japan" and "Come Taste the Band", Joe Cocker – "Mad Dogs & Englishmen", Grand Funk Railroad – "Caught In The Act", Led Zeppelin – "I", "II", "III" and 'IV", Black Sabbath – "Black Sabbath", "Sabotage" and "Mob Rules", Black Crowes – "Amorica" and "Before The Frost ... Until the Freeze", John Coltrane – "Olé", Bob Dylan – "Highway 61 Revisited" and "Blonde on Blonde", Bruce Springsteen – "The Wild, The Innocent & The E Street Shuffle", Pink Floyd - "Wish You Were Here", Mountain – "Climbing!", UFO – "Strangers In The Night", Mastodon – "Crack the Skye", Miles Davis – "On The Corner" and "In A Silent Way", The Beatles – "Revolver" and "Abbey Road", The Rolling Stones – "Sticky Fingers" and "Exile On Main Street". To name but a few…:D

If you were not a bass player, which other instrument you would like to play in a band?

I think everyone have a dream being a drummer – except when it comes to carrying all the equipment ... !

Name the most pleasant but also unpleasant experience you have ever had while on tour with a band.

Most pleasant experience is always getting somewhere far away from home and meeting people who are into the band, there’s nothing better with being in a band than that. Hearing that the music you’ve created matters to people. Worst experience was definitely being food-poisoned on tour with Arch Enemy. Me and Daniel decided one day to spend our buy-out dinner money at a fancier restaurant than the usual McDonalds. So we found this place where I had some really nice Catfish a couple of hours before the show. As we were heading back to the venue my stomach started to act up. And by the time we got back I became really sick. Cancelling the show wasn’t an option so I had to do it with a bucket behind the stage. How I got thru that show I’ll never know ...

What kind of music do you listen during your free time? Do you buy any new records? And if yes, which were your recent purchases?

I’ve been a record collector for all my life, so I’m always listening to music, buying records online, at record fairs and record stores. A few weeks ago I went record hunting in Gothenburg and bought among others Jo Jo Gunne – "Where’s the show?" Mastodon – "Leviathan", Luther Dickinson – "Rock N’ Roll Blues", Strawbs – "Burning for you", Billy Squier – 'The Tale of the Tape", Israel Nash – 'Barn Doors and Concrete Floors".

Thank you very much for your time and we hope to meet you soon!