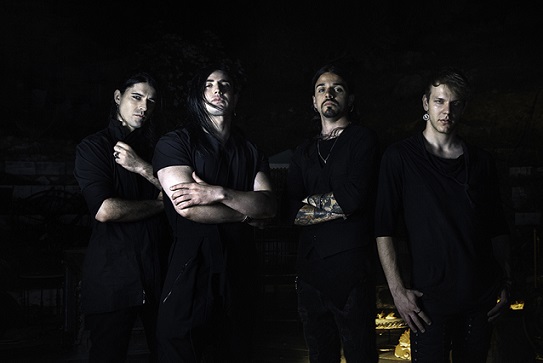 Cyanide 4 has prepared again an explosive cocktail for us – this time it is called “AmaΛgamA” and contains really great glam/sleaze metal anthems, which sound vintage and modern at the same time! With “AmaΛgamA” in their hands the members of this exquisite band gaze at the future with a smile on their face. Myth Of Rock and Dimitris Zacharopoulos contacted Cyanide 4 and Adrian Kyprianos, who answered gently our questions.

You have just released your new, third album, “AmaΛgamA”. Which are your feelings?
Well, after a long time, with numerous ups and downs, we can finally hold in our hands our latest effort! We could actually say that it was a really frustrating period for us, because we had to face the Pandemic-related issues (lockdown, no shows/no fun, “no-life”, etc.) but, meanwhile, the production of our album was not actually coming to an end. That was mainly because of the fact that it was actually 3-times mixed, we had chosen the -as it seemed- ‘not-so-right’ personnel to fulfill that task and eventually it costed both money and time…But never mind, here we are, we are proud of what we’ve done, it’s surely our best and most ‘mature’ effort so far and we hope “album #4” will be another step forward!

Why did you name your new album “AmaΛgamA”? What things do you combine?
All the new band-members had their own musical style and background, so, to one extend, it could be clearly seen on their ideas and playing. All in all, I guess we combine our main influences spanning from the 80s ‘so-called’ hair/glam Metal and Heavy Metal bands to more modern stuff, creating a ‘mixture’, an ‘amalgam’ of what we actually dreamed-off that the sound of Cyanide 4 one day would be…A glam metal band, sounding not like a typical glam metal band. We believe that we have achieved that and hope to build on that further on.

When, where and under which circumstances was “AmaΛgamA” recorded? Who did the production (mixing/mastering)? Describe the whole process of the recordings and the production.
Well, the recordings and mixing took place in Soundgarden Studios, Athens and the final mastering took place in Mystery Room Mastering, Madison (WI – U.S.A.). As mentioned before, we had chosen another well-known producer and had sent all the material abroad to its studio, but the overall result we received didn’t actually meet our standards, or better said, the actual sound-result we had in mind for “AmaΛgamA”!

Where would you trace the differences between “AmaΛgamA” and “Nekyia”?
For sure, it’s the production! Though it was a really time/budget consuming procedure, eventually it turned out to be a ‘level-up’ in comparison to our former album, for sure! Composing was also way improved, eventually resulting to getting closer to the sound-style/result we wanted to achieve!

Who are the main composers of Cyanide 4 today? How is a Cyanide 4 song usually composed? What does inspire you to write music? Where do your lyrics refer to?
The main composers are both our guitarists and the rest of us could give an ‘extra’ touch/idea, if needed. You know, composition is a matter of inspiration but inspiration doesn’t come that easy! I mean, it usually comes at the most “inappropriate” times, haha! Regarding lyrics, we never had any particular pattern in our minds, we had given ourselves the freedom to follow any ‘lyrical path’ we had inside us…Our lyrics are basically based on everyday-experiences, personal experiences or even historical-facts…Whatever inspires us could be eventually ‘transformed’ to lyrics…

In your opinion, which are the trademarks of your sound?
Our sound ranges from the "so-called" 80s' old-style/vintage hard rock one to the more modern, heavy sound. We think that our trademark is the “balance” between past and future and how we achieved to ‘mix’ all those elements, crafting that real amalgam of our own influences!

I sense a melancholy in your songs. Do you agree with me? What feeling of yours do you try to express though your music?
Yes, we agree to that…We never had followed that “Sex, Drugs, Rock ‘n’ Roll”-joyful subject 100%. As mentioned, it’s all about inspiration and taking into consideration that life is hard, unfortunately people go through stressful/sad situations…So, eventually, the expression of feelings through music/lyrics would follow that particular path a little more, to say the least.

You belong to the glam metal genre. How does it feel to be a glam/sleaze metal band in the year 2022? How do you see things for the contemporary worldwide glam metal scene?
When you say glam/sleaze genre, most people are expecting to chew old-staff or to copy the “dino-bands" of the 80's. For us, it's a big challenge, we know that we do something different, avoiding -as much as possible- the 'clichés' that have been established the past years. Of course, we feel grateful to have these influences and we do our best to further develop and progress our music to any direction feels right for us. All in all, there are many great bands in our genre, especially in Scandinavia but the 80s’ won’t be ever coming back…would they?

Which are your favorite glam metal bands? How have these bands affected Cyanide 4’s sound?
The “Dinos”, hahaha! Well, the great ones, of course, like Mötley Crüe, Dokken, Ratt, Poison, Skid Row...Of course they have affected us, by mainly giving us huge inspiration and some of our biggest “idols”! Musically though, we guess that their influence could not be so easily spotted, at least nowadays…

How did the Covid-19 pandemic and the restrictions affect you as a band and as individuals?
Well, as individuals, we guess that it was one of the most boring but also stressing periods of our lives, full of “insecurity” and “isolation”! It was really sad not being actually able to LIVE like you used to! On the band-aspect now…13.03.20, we had just landed in Dusseldorf, Germany and before we even disembark the airplane, we had seen the “postponement” post of the festival we were about to take part (just to mention, we have received NO SINGLE information about what’s eventually happening to that event or anything, whatsoever…still today!)…Adding to that, for a period of about 2 years we couldn’t actually meet/rehearse and consequently do any gigs, because of the occasional “lockdowns” that had been happening in Greece. This whole shit affected the release of the album, too, of course…But, in any case, we hope nobody lives again under those circumstances and we are looking forward to start celebrating life and rock music, as soon as possible, on a stage near you!

Which are your future plans? A tour maybe?
Adding to our former answer just above, we are looking forward to announcing a first run of shows in promotion of our newest album “AmaΛgamA” and get the engines rollin’ once again!

Send your message to the fans!
We are looking forward to seeing you at venue near you and rock our asses-off to some rockin’ tunes! Can’t wait to share the energy with! 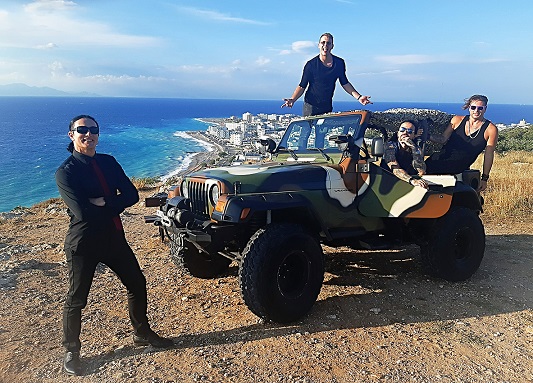