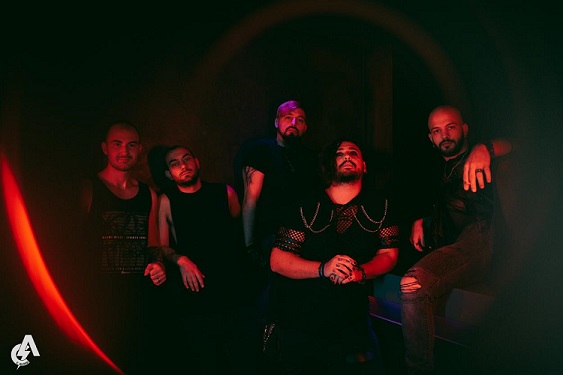 Spektrvm arise as a new force of the Greek rock/metal scene. “Blood For Heaven”, their debut, is a fantastic album, full of modern, dynamic, furious and storming metal bangers. As the band is reaping the fruits of its endeavors, Myth Of Rock contacted Thanos Zabetakis (vocals) for a nice interview. And we spoke about various topics, including the upcoming live show of the band on the 9th of December, 2022, at Temple Athens!

Describe the formation of Spektrvm.

Mike (bass) and George (guitar) met in high school, and bonded over their shared love for music. They formed a cover band initially, but after a couple of years, they decided that it was time for original material.

Spektrvm had a lot of line-up changes until now. Why is that? Do you think that your current line-up is the strongest ever and why?

The initial vocalist did not enjoy the idea of writing new material and was the first to leave the band. The second singer, started writing some songs with the band, but had to leave for work overseas. Metal music wasn’t really his calling anyway, but he was good friends with the band members, still is really, and has a great voice. One of the 2 guitarists of the band also had to leave the country for work related purposes. After finalizing the recording form of all of the songs that would end up in the debut album, the guitarist that had left for England, returned, and the newer guitar player left, of his own volition, to be  part of another project and another band, so the former band member rejoined the ranks to fill in that spot. So there are now 4 of the original band members, with the vocalist that reshaped the first songs, created the rest, and recorded all of them in the studio. So it is safe to say that this is the strongest line-up yet and ideal to continue the work of Spektrvm.

You released your debut album (“Blood For Heaven”) some months ago. How do you see this first album now? Are there any things you would like to change now in this first album?

We are really happy with the outcome of the album. We had finished recording it a while back, but the whole pandemic situation was not helpful towards a responsible release of the material. The recordings were great, and the mixing was truly masterful. I don’t think that anyone would like to change the songs of the album, but rather keep an open mind about tempos, melodies and solos, depending on the energy at any given day. So given the time that we have had from the day the tracks were mastered to the day they were released, if we wanted to change something, we could and would have done so before releasing it.

So this being our first album, we were receiving a fair amount of, let’s just say less than ideal offers for a deal, and after a few months, we were considering going for an independent release. At that point a much better deal came along, and we seized the opportunity the grab it.

Who writes music and lyrics in Spektrvm? How were the songs of “Blood For Heaven” composed?

The music is written by all members. Someone comes up with an idea, someone is adding something else, or making a note for something to slightly change, and building on top of one another, the song composition is revealed, which will then be tweaked a number of times before reaching its final stage. The lyrics are written mainly by the singer, following a theme, that is decided depending on the feeling that we, as individuals receive from the vibe of the music, but the bassist has been a really big help on that front as well. There were also a couple of songs were the lyrics were there first, and a specific instance were the vocal line with the lyrics were there and then the music had to follow. It’s a fun and unpredictable process.

Describe the recording process of the album. Who did the mixing and the mastering?

Dionisis Christodoulatos did the recording and the mixing, at CFN Recording Studios, and the mastering was done by Vu Productions Mastering Studios. Each one of us recorded their instruments, rhythm guitars were mostly written by one guitarist, while melodies by the other, even if they redistributed the parts after the recordings. Drummer and bassist of course recorded their own parts. Finally Vocal lines were added - fun times - and many of the background vocal lines, were ideas that were actually pitched by Dionisis, with a fresh pair of ears and a lot of years in the music industry, this experienced specialist was a huge help on the vocal harmonies that are hidden in lower frequencies and volumes within each song.

How would you describe the music style of Spektrvm? Which are your music influences?

Our music style can’t really be very specifically labeled. The most generic title would be heavy metal, but sometimes we are more doom, sometimes more progressive, more folk, more nu, alternative and so on. It really depends on who is listening to it, and what comparisons their minds make while doing so. Some of our influences are Tool, Disturbed, Avenged Sevenfold, Metallica, Guns N’ Roses, Iron Maiden, Pearl Jam and a dozen other great artists, even outside of the rock/metal scene, that have left their small mark, translated in this album. As for the next one, who knows?

Where do your lyrics refer to? Which is your inspiration, as far as lyrics are concerned?

The lyrics of this album, refer to “things, situations and institutions” in society, that we deem, problematic to say the least, and in a sense “condemn” through our songs. Political and religious propaganda, greed, vanity, war -both as an action but also a state of mind-, rage, racism, the grief and depression that are products of those, as well as our part in empowering, at least some, if not all of the above. Those are some of the main issues that our lyrics tackle throughout this album.

Which feelings of yours do you try to express through your music and lyrics?

We are definitely expressing some disappointment, anger, despair, sadness, but also hope that we can all work together to change the world into a better place.

Give us all the important information about the cover artwork of “Blood For Heaven”.

The artwork was made specifically for the album, by Remedy Art Design, who did a brilliant job. We provided the album, the lyrics and the meaning, and while actively listening to the songs, the artist drew all of these wonderful pieces, really expressing visually, the received vibes, in a twisted, but also beautiful way.

How were you affected by the Covid-19 pandemic and the restrictions as individuals and as a band?

Covid-19 locked us all in, the album was just finished and we had nobody to play it to. It was fun for the first couple of months, not working, staying inside and everything, gave us some time to breathe, but it got old really quickly after that. We were unable to practice together, or perform, or even release the album, because firstly it would make no sense, and secondly, there was no active income for some of us to support this endeavor.

You have played live lots of times. How do Spektrvm sound on stage? How important are live concerts for Spektrvm? Which is your favourite concert until now?

We believe in musical integrity very much, and in the past we used to have that as our only focus. Played the songs 100% and were happy about it. But after a while, we started wilding out a bit, with the on-stage performance, and that’s how we grew more passionate as well. Each one of us probably has a different show as a favorite, depending on performance, conditions and audience, both in numbers and in energy levels, so it would be hard to narrow it down to less than 5.

You are going to play live in concert on the 9th of December at Temple Athens. How do you feel about this concert now, some days before it happens?

After the whole pandemic situation, we will be playing our second live show in 2,5 years as a band. Which is tragic, but also very exciting, and the energy is off the charts!

What should the fans expect from Spektrvm and this live concert?

Thank you so much for supporting us, but also the music scene in general. We love you very much and can’t wait to see you on the 9th of December! We’ll bring our A-Game and we expect you to do the same. Spektrvm, out!

Thank you very much and have a nice concert on 9th December at Temple!

Thank you so much! 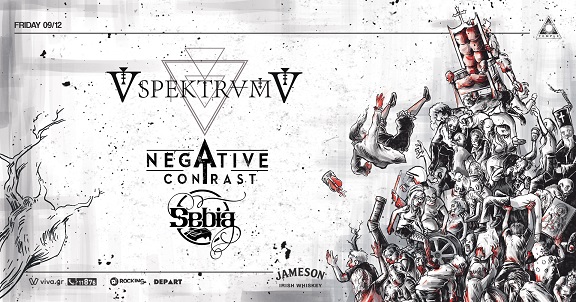