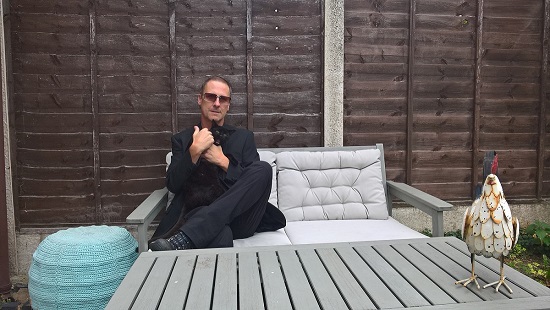 British alternative pop and rock artist Sicky comes back with his new album, “Garbage Town”, and Myth of Rock can’t stop stomping its foot and singing along to his music. Sicky has things to say with his songs, so, we came in contact with him for a nice chat, small but so interesting. You can see for yourselves, my friends!

When, where and under which circumstances was Sicky formed? What did you do before forming Sicky?

Hello Dimitris! Thank you for asking about my music. I started the Sicky project after the band Sumo split in the late 2000s. It was a natural morphing, because not all my songs would necessarily work with the band.

Sicky is a solo project. Do you only sing or do you also play the other instruments in this project?

Everything you hear is me (for better or for worse!-). Singing, guitars, drums, keys. I’ll try and get a tune out of anything I can lay my hands on.

Why did you name this solo project Sicky?

Sicky was a nickname given to me by my Sumo band member friend Dan Raven. It kind of stuck.

Which is your favorite song from “Garbage Town” and why?

I think I’d have to go with “Sleep On It” as a favourite track from the album. Maybe because of the way the production worked out. It has room to breathe and sounds big.

If someone asked you which the music style of Sicky is, what would you answer?

I would say the Sicky sound falls into the alternate/indie pop neck of the woods. Leaning on the darker side of pop …. Sicky pop!

I did a cover of ELO’s “Telephone Line” in 2017. It’s on the “24 Days” album. Loved that song as a kid, it sounded so sad and vulnerable. I’ve been influenced by many artists/genres including…. Bolan, Bowie, Elvis, Scott Walker, Nirvana, Blur, Beck, Kate Bush, Idles, Supergrass, The Divine Comedy and many more.

Do you write the music and lyrics all alone? Where do you draw inspiration from?

Yes I write all the lyrics and music. Life inspires me. Things that happen to me or people around me, good or bad. I tend to write, when I least expect it. I never sit down and plan to write something, all my albums have been accidents.

I have a bedroom studio with limited gear. This I find can be a good thing, it makes you keep things simple. I’ll put the basic idea down with a guitar and build from there. Less is more, most of the time. If a recording starts to sound a bit confused or messy, I’ve probably over cooked the broth and need to brutally delete a few things. Production is a bit of a jigsaw puzzle and I’m still learning how to put things together. It’s a fun process though.

My solo album efforts so far are … “Loveland”, ‘Lost Souls Found”, ”24 Days”, “Sun’s Up”, “This Is My Life”, “Bowling Balls” and now “Garbage Town”. I’ve been a busy boy! -) The albums vary in moods. “Bowling Balls” for instance is a much more laid back/trippy affair. Let’s hope it’s seventh time lucky with “Garbage Town”.

If you could cooperate with another famous musician, who would he/she be and why?

I’ve worked with some fabulous musicians/producers along the way. I really like working alone these days. It’s nice to lock yourself away with no outside influences. Can only blame yourself that way. Most of the musicians I’d like to work with are sadly no longer with us.

Do you play live as Sicky? Are concerts important for you? Do you have any tour plans?

I love playing live. I have a couple of gigs coming up to try out the new album. I’ll be doing acoustic versions of the tracks that work stripped down. Playing live is the best way to test a song out, see what works and what doesn’t. The human reaction does not lie.

Which are your ambitions for Sicky?

As far as ambitions go, if my music ends up on the jukebox in my local pub I’ll be a happy boy .… Oh and I’d like to tour the world.

How difficult are things for an alternative musician in UK today?

It’s always been difficult to get heard amongst the crowd. I think if you work hard and it’s good enough the music will find a way through. It’s a healthy time for independent artists because of the ability to just release your own stuff. I’ve had record deals in the past and this is much more fun and rewarding.

Send your message to our readers!

My message… Hello lovely Myth Of Rock readers. If you like dark matter, heart felt musings, rough edge diamonds, heart on sleeve kinda music… Then please give “Garbage Town” a listen…. It might just leave a mark.