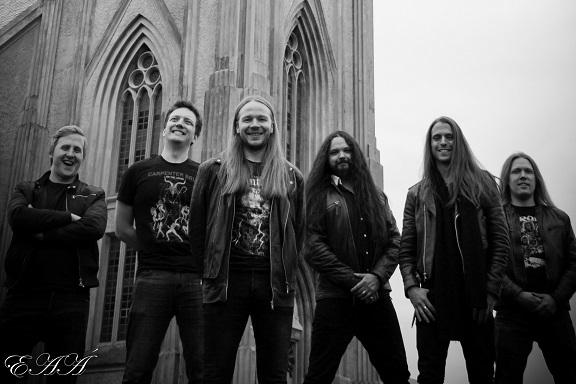 Their debut album came as a true shock to all fans of speed/power metal. "With The Magic of Windfyre Steel" is an unbelievable new metal release, which will make every fan of melodic metal smile with joy. Glorious, victorious and triumphant, Power Paladin stands out as a newcomer band, which has things to offer. With anthemic songs, incredibly beautiful melodies and super-catchy riffs, Power Paladin take the baton from bands like Hammerfall, Edguy and Rhapsody of Fire, and fly to the power metal sky with passion and conviction! This is a hell of a ride, a venturesome journey, and it has started just now! Follow the angels and see them sit on the power metal throne! And Myth of Rock is stoked to share the chat that Dimitris Zacharopoulos had with the band. Read what follows, and you will discover that "With The Magic of Windfyre Steel" is an absolute masterpiece!

Where, when and under which circumstances was Power Paladin formed? Who were the founding members? What do you remember most from the very first days of the band?

Krilli: We’ve all known each other for a long time prior to forming Power Paladin, and have played together in various bands in the past. Me and Kalli, our drummer, were in an earlier power metal band that disbanded back in 2017 - Atli had been writing material for a while and asked us if we wanted to form a new power metal band. Ingi, and the Bjarnis soon followed.

Ingi: Pretty much just the usual suspects when it comes to liking power metal and somewhat knowing how to play an instrument. I remember thinking “nobody likes power metal, this is sure as shit going to fail”. Then people actually showed up to the first gig, which was already more than I expected, it just kinda snowballed from there.

Can you explain us the name of the band? How and why did you choose it?

Krilli: We were initially just called Paladin. Paladins are righteous warriors who fight for good, and we felt that captured the vibe of our music pretty well. When it was time to release our album, we found that a American metal band also called Paladin had just released their first album - To prevent confusion, we knew we had to change our name. We threw some things around, but Power Paladin was eventually what we landed on.

You released your debut album, “With the Magic of Windfyre Steel”, some months ago. How do you feel about that? How do you see the album now, some months after its creation and official release? Would you change something, if you had the chance?

Krilli: Personally I’m just very satisfied. The songs are great, the album sounds amazing, and the reception has been fantastic. I don’t think I would change anything. That’s not to say that there aren’t other things I’d have liked to do, but that is what the next album is for.

Ingi: I’m very satisfied with it, wouldn’t change a thing - some people have complained that we didn’t have a ballad while others have celebrated that fact, some people think the album is too long, other too short and some people prefer that we play more songs in the NWOBHM style like Kraven the Hunter while other want the 7min+ songs like There can be only one or Into the forbidden forest. But the fact that nobody seems to have the same opinion on it makes me feel that it’s the best possible outcome, so yeah. I definitely wouldn’t change a thing.

Your songs are in the classic euro-power metal style. Do you agree with me? How would you describe your music to the fans?

Krilli: I’d say that’s accurate. We set out from the start to play power metal, and that is what we did. I think the music is fairly straightforward power metal, but we have a lot of influences from all over the place. Our songs are all written by either Ingi, our lead guitarist, or Atli, our singer. Ingi brings a lot of progressive and neoclassical influences, while Atli draws more inspiration from classic heavy metal and 80s glam rock.

You come from Iceland. How are things for metal in Iceland nowadays? Is there a local scene?

Krilli: Iceland has an active metal scene, but it is dominated by black metal and death metal. We are the only currently active power metal band, to my knowledge.

Ingi: It’s like Krilli said, very black/death metal dominated with a lot of the same people playing in all the bands but recently there have been some youngling newcomers (no not us, we’re all pretty old) that have been creating some really fantastic stuff. I would definitely recommend being on the lookout for some of them in the future.

Which are your main music influences? Which bands/artists had a significant impact on you?

Ingi: I think we’re all just very power metal driven - Rhapsody is one of my favorites but I think all of us are big Iron Maiden fans.

Krilli: All our songs are written by Ingi or Atli. They will write a song, and send it to the rest of us. We will then provide feedback, and the song will usually change a bit when we start rehearsing it. Some of the songs then changed quite a bit in the recording process. For instance, when recording Ride the Distant Storm we weren’t really sure what to do in the solo part - Atli suggested a harpsichord solo, and Ingi hated the idea. They  had a big argument in the studio, and got quite heated. Ingi, exasperated, declared that he would write a harpsichord solo and put it in there, just to demonstrate to us that it would be horrible. It turned out amazing and we all loved it, so it stayed in!

Lyrics! Who is responsible for the song lyrics? Which are your favorite topics? Do you try to pass any messages through your lyrics?

Bjarni E.: Atli has the honor of being our lyricist and our favorite topics would definitely be fantasy oriented, which is probably the most common in the power metal genre. The message we try to pass to our audience is to crush your enemies, see them driven before you, and to hear the lamentation of their women.

Who is responsible for the fantastic album cover? How does the album cover reflect the music content of the album?

Krilli: The album cover is by the talented James Childs. Atli saw his artwork and commissioned him to create our album artwork. I think the art is quite reflective of our music and the wider power metal vibe - A majestic dragon in a fantastical land, with adventurers on a quest in the foreground. Very power metal!

Which are your favorite fantasy movies and books?

Krilli: I’m a big fan of Brandon Sanderson’s Stormlight Archives series. One of our songs, The Way of Kings, is a reference to that series. I read a lot of science fiction and fantasy. One of my later favorites is the Steerswoman series by Rosemary Kirstein.

Many people say that European power metal is in decline nowadays. Do you agree with that? Which do you want your role to be as a newcomer band in the contemporary power metal scene?

Krilli: That may or may not be true. There are quite a few bands that have been doing extremely well lately with variations of power metal, such as Powerwolf, Sabaton, Gloryhammer, Battle Beast and Beast in Black. But I suppose that “classic” power metal isn’t as popular as it was ten years ago. Maybe that is why people enjoy our album. As for our role, I’m not sure if we’re really trying to play any. We just want to play our music and we’re flattered that people want to listen to it.

You are in the Atomic Fire roster! How did the deal with Atomic Fire come? Are you satisfied with the label?

Bjarni E.: It just kind of happened. Þorsteinn Kolbeinsson is a friend of ours, he is a concert organizer, and the organizer of the Icelandic Wacken Metal Battle and annual Icelandic Wacken group trip. We sent him the album once we finished, and he sent it to some music industry folks he knew - Including Markus Wosgien at Atomic Fire. Markus contacted us and asked if we would be interested in having a chat which ended up in us making a record deal. Yes, the collaboration between us and Atomic Fire has been working very well. Their roster is made up of very good people that are very nice to work with.

Which are your current activities? A tour maybe?

Have you started preparing your new, sophomore album? What should we expect from the new album of Power Paladin?

Krilli: We’ve written a couple of songs, but we are very much just starting out. Hopefully people will enjoy the next album, if we ever finish it, as much as the first!

Send your message to our readers!

Krilli: We are immensely flattered at the reception that our album has received. It is very strange and wonderful that people from all over the world are listening to and enjoying our music. We thank you so much! 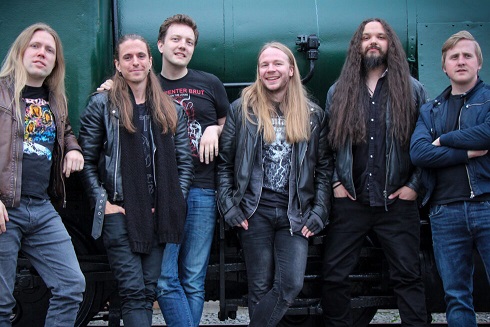