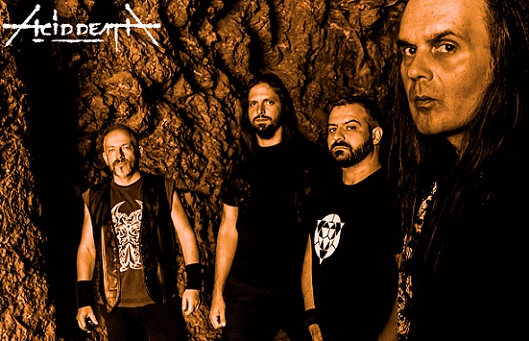 The 15th of May 2022 and the Breaking the Curse Festival are closing near! All fans of Greek extreme metal are waiting for this live meeting at Temple Athens, where we will enjoy four historic bands of the Greek Scene: Selefice, Piranha, Death Courier and Acid Death. Myth of Rock met Savvas Betinis, the mainman and bassist/vocalist of Acid Death, and has a nice chat, about this upcoming Festival and many other things. Read what follows and prepare for the '90s guard meeting!

How do you feel that you are going to play live in the Breaking The Curse Festival?

Yes, it is amazing! We hit the stage two years ago for the last time due to the entire pandemic situation, things worked really bad for all the bands. Now we hope all this thing will finish in some way, so, time for action!

Acid Death is one of the most historic Greek extreme metal bands. What does make Acid Death unique? What keeps the band still going?

Of course our love to music! Creating music is a serious part of our life. Acid Death is our ship for this creation-trip. That's the way we still exist, we still make new things. Hopefully we will remain in the scene for many, many years!

Yes, today we can say that Greek metal bands are a part of the entire metal scene worldwide. The reason is very simple. Greek bands today are working hard, really hard for making good music, good shows etc. This is something that everyone sees. We are sure things will be even better the next years!

Acid Death began its career in the late 80s/early 90s. Was it more difficult to play heavy metal in Greece then? Why?

Yes, it was.... Heavy metal was an “unknown” thing for most of the Greek music audience.  Radio, television weren't friendly to this kind of music, the bands were of course few and things were working really hard for all cases. No live-shows, very few record labels... Fortunately, things are totally different today.

Your latest album was “Primal Energies” (2019). Are you satisfied with the way the fans received the album? How do you see this album now?

Yes, we are really satisfied, actually we believe this is the best album we have made so far. Unfortunately, the pandemic situation didn't help us to promote is on the way we would like to do, making enough shows in Greece and Europe, but hopefully we will do it next period.

How did the pandemic affect you as a personality and as a musician? Do you think we will get out from this situation better and wiser as human beings?

Everyone was affected from the entire thing... Art generally stopped, we as musicians had to be isolated... No rehearsals, no temper for creation... Things seem to be on a good way at the moment, everyone wishes the pandemic thing to stop faster than government says...

There are many ideas on the table, but we have a lot of work to do. We want to make an even better album than “Primal Energies”, so we will work hard for any new material.

Acid Death music is an amalgam of thrash metal and death metal, with progressive elements. If you had the chance to describe Acid Death and its music with five adjectives, which would be these adjectives?

Yes, that's right! The music elements come from thrash, death, industrial, and even jazz or fusion. We describe the current third season that the band exists with the following words: (Still) progressive (but more) death metal!

Which do you think was the worst and which was the best moment in Acid Death’s history, until now? And why?

Of course, the worst moment was the band break in 2001... We lost so many things that follow the years after that moment... The best moment is of course today. We are here, we are strong and ready to create new things!

Thank you so much for this presentation! We are waiting for you all on May 15th at Temple Athens! Let's tear down that place!!!