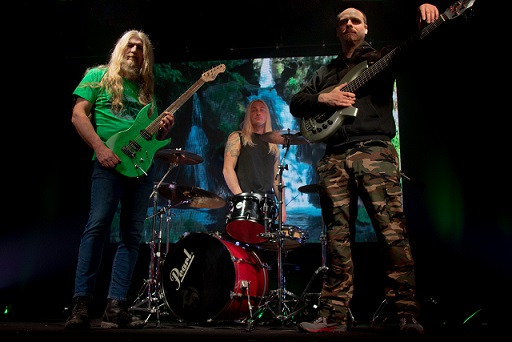 In our days, there are many bands, which incorporate several different music elements in their metal sound, that the result is extraordinary, having a strange beauty. One of these difficult to describe, as far as their music style is concerned, bands is Celtic Hills. Indeed, the Italian band has a special music character, and I admit that I liked very much their sophomore album, “Mystai Keltoy”, released in past April, 2021 via Elevate Records. Myth of Rock contacted Celtic Hills and chatted with the band’s vocalist/guitarist, Jonathan Vanderbilt. Right here you can read what was discussed!

When, where and how was Celtic Hills formed? Give us a short biography of the band.

The first nucleus of the band started playing in a garage in 2008, but already in 2010 by recording the first CD the line-up had changed.

Why did you name the band Celtic Hills?

We live in a part of Italy near the border between Austria and Slovenia, a territory famous in the world for the production of wine. This portion of Friuli is called "Collio Friulano". In ancient times they were the hills of the Celts. We have chosen the toponymy of the place as the name of the band.

You have released only two full-length albums until now. Why is that?

Since the first CD of 2010, there have been many reasons of private life that have prevented us from continuing to play. To keep the band alive we have released singles on international compilations with the Slovak label MusicGlobAlliance (on the label's website you can download it for free or order CDs). In 2020 Elevate records hired us to record "Blood Over Intents" and in twelve months we released two full lengths and an EP.

How would you define the musical style of Celtic Hills?

I would define it as "Schrage Musik", an explosive blend of speed, thrash, epic and power metal!

Your lyrics seem to be epic, grandiose and philosophical/symbolic. Is that right? Can you describe the lyrics of Celtic Hills?

The lyrics, as well as the songs, tell about things. In everyday life you express many thoughts too. So it is for our music! The texts speak of historical events, esotericism and philosophy, but also of more stupid things dedicated to wine and beer festivals, motorcycle rallies, historical re-enactments.

You released the “Mystai Keltoy” album some months ago. How would you see this album now? Are you satisfied with the reactions of the press and the fans? What would you change now in this latest album, if you had the opportunity?

“Mystai Keltoy” is really liked a lot by both the audience and the critics and as I am writing, we are already recording the next album, which includes some songs that were supposed to be about “Mystai Keltoy”! Here too there will be fast tracks and choirs to sing at concerts. I love choruses.

Working with Michele was fantastic, so much so that the new album is also produced by him! His technical preparation is beyond question, but also from the human side, it is very pleasant to work together.

Who is the one who writes the music and lyrics in Celtic Hills? What gives you inspiration? How is a typical Celtic Hills song composed?

Do you believe that Earth was colonized by ancient alien populations? Can you expose your theories?

I believe that the academic world has hidden many truths: today we have concrete evidence and archaeological finds that should be a reason to admit that history on planet Earth must be rewritten! I have been conducting research and documenting in a scientific way for years. There is a whole world of researchers publishing very interesting research.

In the song “Eden” you have a special guest, Germana Noage. Can you give us some info about this cooperation?

I met Germana, because she sang in a band of our own record label. We had just finished recording the EP, where there were a lot of guests and not having participated in this funny EP, I invited her on the next record. The song went so well that she has embarked on a solo career and I write her guitar parts for her record. The first video of her with the song “Surrender” is released in October 2021.

Do you read books/watch movies? If yes, what kind of books/movies?

I read a lot of books and have a very well stocked personal library! The classics of Greek philosophy, history books and many specialized magazines! I have a good movie collection which contains old movies from the 30's up to recent releases. But also a good collection of vinyls and CDs.

How were you affected by the coronavirus pandemic as musicians and as personalities? What do you think of the COVID-19 vaccine?

The “Conan” film with Arnold Schwarzenegger opens with an aphorism by Nietzsche, which reads: "That which does not kill us makes us stronger". Personally I believe that Nature loves those who are in tune with it, humans cannot believe that they can always overwhelm nature. The vaccine has not yet proven to be miraculous.

Are you planning to tour? Any other future plans?

Our management has offered us festivals around Europe in 2022, in Finland with Manowar, and other dates as opener to other famous bands, but all these events are not yet confirmed by the organizers. The confirmations will be after October 2021.

Your message to the Greek fans!

Although I have studied the philosophy and history of classical Greece, I have been to   Santorini to see a fresco, to Corfu participating in a sailing match (the "Rimini-Corfu”), I know very little about metal in Greece! So I invite the Greek fans to show me and let me know the musical side, because as Socrates said.  “I know that I know nothing”.