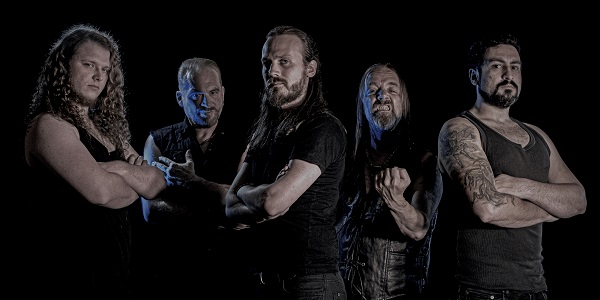 After some significant line-up changes, Rebellion has just released its new album, the fantastic “We Are The People”. The German heavy metallers are more passionate and energetic than ever and deliver some extraordinary new songs. Myth of Rock didn’t miss the chance and spoke with the band about several, interesting subjects. Rebellion was represented by guitarist Fabrizio Costantino, who gave some really clever answers. Proceed and you will see for yourselves!

Rebellion is releasing its new, ninth album. How do you feel about that? Which are your ambitions for this album?
Yes, it’s pretty cool to be part of this. Personally, it is my second album but in this case the songwriting was a little different. Rebellion has twenty years of band history, so of course we wanted to reach old Rebellion fans just as much as we wanted to make a modern metal album. And then, there’s also the subject of the album which is kind of sensitive to say the least. So tying all of this together we are pretty happy how it turned out.

Where would you trace the differences between “We Are The People” and the previous Rebellion albums? How much different does Rebellion sound on this new album?

Since the lineup has two new guitar players and a new drummer, there are some musical influences that you may not find in the older albums. My song writing, for instance, is very death and black metal influenced, so you’ll definitely hear some tremolo picking on this album. I think every Rebellion album has a distinct sound to it. Maybe it was because of Covid and the lack of gigs, but with “We Are The People” we wanted to sound like a modern metal band. Does that make sense? I mean, some bands sound like an orchestra on CD. Some sound very sterile. We just wanted to feel like listening to a band again.

How would you define the music style of Rebellion? I would say that it is teutonic heavy metal with a modern touch. Do you agree with me?

You know, it is interesting for me to hear that. I have no idea why we should be labeled teutonic. It is not a musical category. It just pins us to a certain place of origin or ideology in the worst case. I think I’d agree with you on all the rest. Allthough, there are influences like I said before that aren’t really used in heavy metal with a modern touch, haha!

Which would you say are the trademarks of Rebellion?

That pretty much every album is designed as a concept album. The second trademark is probably Tomi (Göttlich, bassist and mastermind of Rebellion). He is our mascot, haha! As a historian he has some profound understanding of the subjects he writes lyrics about.

When and where was “We Are the People” recorded? Which was contribution of Uwe Lulis to the new album? How would you describe Uwe Lulis as a record producer?

We started recording, I think, in November last year at Uwe’s Black Solaris Studio. And man, Uwe is such a great producer. Especially Martin (Giemza, guitars) and me, as the guitarists were shitting our pants. The great Uwe Lulis is producing our album. You better be well fucking prepared! And then he is such a nice guy. If something didn’t sound right, he even showed us different techniques on guitar and it worked out instantly. Other than that, he was also curious about our own style of playing and gave us the freedom we needed. Great guy, really.

Who did write the songs (music and lyrics) of the new album? How is usually a Rebellion song composed?

Most of the music was written by Martin. Tomi wrote most of the lyrics. The lyrics for “Verdun” and “World War II” were contributed by our vocalist Micha (Seifert). Oh yeah, the music to “World War II” was written by Uwe Lulis. A little tap to the hat since he was also a founding member of Rebellion, when Tomi and him parted ways with Grave Digger. I wrote “Vaterland” and “Gods of War”. “Shoa (It Could Have Been Me) ” was written by me and Martin. So you see, basically everyone involved with the band contributed to the album. It really was some team effort!

Αs far as the lyrics of the new album are concerned, I know that there is a political concept. Can you present this concept to us? Are there any symbolizations, any metaphors, any messages you try to send through this concept?
Typically, I am not a fan of authors explaining their intentions. An album is never released into some sort of cultural vacuum and things that we may have intended in a certain way, may trigger the listeners in a totally different way. And I think that is awesome. Nevertheless, there are some musical ideas that I just loved on the album. “Verdun” for instance is a very special song in Rebellion history. The main riff is basically how we interpreted the troop movement of the Verdun battle. Slowly going back and forth only interrupted by machine gun firing. If you want to analyze our songs, I’d love to read about that!


The new song “Vaterland” is inspired by the national anthem of Germany but uses completely different lyrics. How/Why did you decide to that?
Remember what I said about the intentions of an author? “Vaterland” is a good example for that. I wanted to write an opener for the album. A song about the French revolution. So I used a musical quotation of songs that were used back then. The hymn part used to be a commentary on the French revolutionary song “Ça ira”. When I presented the song to the band, Tomi was immediately struck by that part and instantly had lyrics in mind. I was very surprised that it didn’t have anything to do with what I intended, but I liked the way the song became a little cynical all of a sudden.

Do you think that an artist should by politically active/sensitive?

I think we have no choice, to be honest. I mean, everyone is free to ignore their environment once in a while, but as adults people should have some sort of political standing. And actually I must admit, it seems these days the kids are politically more active than most of the adults. However, what I am far more concerned about is the lack of ideological criticism nowadays. And that counts especially for the entertainment industry. That is why “We Are The People” isn’t always feel good riffs and loads of choruses to sing along. Sometimes you need to be disturbed to reflect on your habits. That sounds so arrogant, I’m sorry! Fun is also political!

The new album cover is amazing! Who did it? How is it connected with the concept of the new album?
Björn Gooßes did the cover. We told him about our idea to cover European history. We had some ideas and he just did what he wanted and we are very happy about that. Love the art work, too. On the LP it looks even better, because its bigger!

There were lately some changes in your line-up. Can you tell us what really happened and how did the new members affect the final sound of the new album?
Hi, I am Fabrizio and I am a new member of Rebellion! I mean, I said it earlier, we were doing quite the work on the album, so I like to think that we are pretty responsible for its final sound. But in the end, everyone gave their two cents. The whole band (even Sven Tost, although he is the drummer) arranged the songs together in our practice room and of course Uwe helped us finding a fitting guitar sound. Tomi always had an eye on the overall concept and also made sure we would still sound like Rebellion.

How are things for the classic heavy metal scene in Germany nowadays?
Culture is dead at the moment. Thanks to Covid and not very helpful German politicians. Maybe, I just don’t know, I have no idea.


Can you name five rock/metal albums that have defined you as a musician?

Definitely more than five and a lot of non-Metal-albums, but: Lamb of God – “As The Palaces Burn”, Machine Head – “Imperium”, The Faceless – “Planetary Duality”, Necrophagist – “Onset of Putrefaction” and The Black Dahlia Murder – “Miasma”.

How did the coronavirus lockdowns/quarantine affect you as humans, as professional musicians and as a band?

We were a little more cautious of course, but other than that it didn’t really affect us too much. We were lucky. As a band, it made us record an album without ever having had gigs together. Actually, that is weird.

Which are your future plans?

Gigs, Gigs, Gigs! We cannot fucking wait to get on stage again. We have a Germany tour booked starting at the 24th of September. And we hope there won’t be any lockdowns killing our plans again. We’ll keep you updated on our social media!

Thanks for making it this far through the interview! If you get our new album “We Are The People”, take a night off, listen to it from beginning to end, maybe in a bathtub drinking something you like, send us a picture if you want and well ... I hope you’ll enjoy it! Stay tuned!