Liat Dagan is an indie rock artist from Israel, who is attracting our interest with her beautiful songs. Myth of Rock came across Liat accidentally, just while surfing on the internet, and soon got excited with Liat's music. Liat answered our questions in her own sincere way, proving she is a genuine artist, who has a certain musical vision. Listen to her lovely music and read the following lines, in order to get the full picture! Never let her go!

When and how did you get into music?

Music has always been my special thing… a getaway path since childhood as a listener, then a few years ago I moved to Mitzpe Shalem, it’s a small place near the Dead Sea in Israel. I actually used to write song lyrics all the time since my childhood, but had nothing to do with composing or singing, till one day 10 years ago after I moved there, I was writing another song and out of the blue I heard it with a melody. That was the beginning of it.

When and how did you start your musical career?

After finding my own music in me and starting to hear melodies in my head, I bought my first guitar and started playing around with it not knowing any chords at all… but I couldn’t stop. This was the beginning of composing for me. I was trying to sing, went to a few vocal coaches, assembled a live band and started performing, but I felt it wasn’t quite there. It was mediocre and it was an awful experience for me. I didn’t know how to really use my voice. I couldn't connect to my soul while singing and the worst part was, I didn't know what I was doing wrong. I was so scared going on stage and my throat got sore all the time. Every time I sang it was a gamble if I would hit the note or not. My vocal coach at the time always told me I am a great singer and it is all in my head. I knew how good singing sounds like and this wasn’t it.

One day, a week before another gig, my band members told me that they are all quitting the band and that I should give up because I will never be a singer.  I remember this phone call… I couldn’t stop crying for two days, my ego was so bruised I could almost see what it physically looked like. At that point I just gave up the idea of making music whatsoever. I was tired of struggling with it. Three years ago, in the small bar where I live, I heard a Walkways (an alternative metal band based in Tel Aviv, Israel) song for the first time. After getting home I looked them up on YouTube and ran into a live version of their song ‘Out’. I never saw anyone sing like that before. That was the moment I decided to start over.

Can you give us an overview of your discography until now?

How would you define your musical style?

I think my musical style is pretty eclectic in the realms of indie rock. Some songs are hard rock and even have some metal elements in them like ‘ConditionaLove’ and some have a more acoustic vibe to them like ‘Let go’ and ‘Safe Shores’. In the full album perspective, I think it’s half hard rock and half acoustic.

Do you write the music and lyrics of your songs? Which are your influences? Where do your lyrics refer to?

I write the lyrics and in some of the songs my current vocal coach and album producer, Ran Yerushalmi, upgraded some of the lyrics as part of his very inspiring working process. I don’t think of influences as something you will necessarily hear in the music as is, but more as a specific inspiration of uniqueness in the way that some bands and singers create their music, sound and energy. I can even be inspired by the intensity I hear in some background guitar channel.
Mostly I’m inspired and influenced by  Walkways, Pixies, Radiohead, Mr. Bungle, Korn, Muse, Bjork, David Bowie, Skunk Anansie, Gojira and more. My songs’ lyrics refer to overcoming ourselves through all the shit and the good that happens in life. And mostly it's about the mind-blowing insight of knowing that we are actually creating our own path. 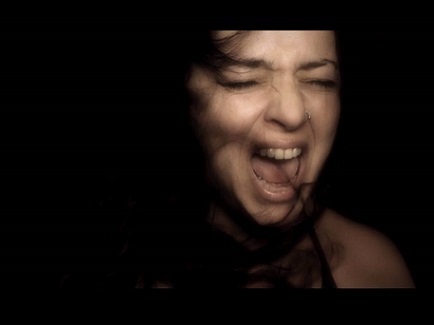 Your songs are quite emotional. Which feelings do you express through your music?

Feelings are like colors. You can recognize Purple, but if you go deeper, you’ll find many different colors and shades in it. So, I think the main feelings that come to mind while listening to my music are sadness and anger.. but when you go deeper, there are many shades of love, lust, hope and happiness that come to heart.

In the song “Safe Shores” you have collaborated with Ran Yerushalmi. How did you decide to work with him? How did the collaboration go?

Collaborating with Ran came as a result of an intensive and amazing three years work with him as my producer and vocal coach. As I mentioned before, Ran Yerushalmi (the lead vocalist of the metal band Walkways) was also my inspiration to start over after I gave up. Working with Ran is motivating and inspiring on so many levels. He is a freaking talented artist and a very special person.

How are things for rock music in your country, Israel? Is it difficult for a young Israeli woman to be a rock artist?

I have never been a musician anywhere else, so I think I can give an answer about how hard it is to be a musician in general. And it is definitely challenging for obvious reasons, but also because when you are dealing with something you strongly believe in, something that feels like you’re destined to do, it involves a lot of ego issues, for me at least.

Very often we are focusing on the outside world - to get recognition and to be heard, when the thing is to deal with what’s going on the inside, because that's where the real difficulties are. To deal with my inner demons and get recognition from them, for me that's the hardest and the most wonderful thing in my own journey. Overcoming ego is magical.

Do you perform your songs live in concert? How important are live performances for you?

Since my journey so far, performing live is very important to me. In the passing year with the lockdowns and everything, performing wasn't possible… And now that it is (Thank God!) I am working on an acoustic live show of my upcoming album repertoire, and really looking forward to getting back on stage with my heart and soul this time.

How did the global pandemic affect you as a person and as an artist?

As an artist I focused on writing and recording new songs. I also recorded two live versions of “Safe Shores” and “Home” and produced a music video (at home) of “ConditionaLove” that will be released very soon. As a person, I feel that this pandemic is actually the usual human drama but in much higher volume. We are always in the unknown, and we mustn't take anything for granted, but as humans we often forget that. So, for me this was another reminder to do some inner checkup and to evolve.

Which are your future plans? A full-length studio album maybe?

Yesss! My full debut album is in progress, actually a couple of new songs will be released within this summer. Also, along with my new upcoming acoustic show I’m planning to start rehearsing a full electric set.

Your message to our readers!

Always be creating, no matter what you do. Creation is in everything. It is within you. If there is anything greater than fulfilling our biggest dream, it's fulfilling ourselves as humans through it. Thank you everyone. Love, Liat.