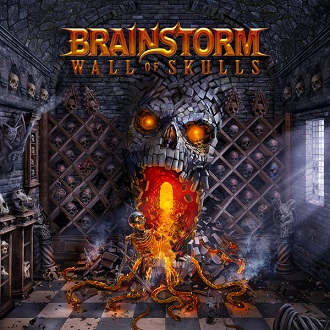 Brainstorm is a band with a long, successful history and with every album released, they go many steps forward. This time Brainstorm’s work of art is titled “Wall of Skulls” and I have to say that this new album is one of the band’s best releases to date! Musically, the Germans continue to perform their dark, solid, super-heavy power metal, they continue to be influenced mainly by US metal bands and continue to be based on the guitar layers and Andy B. Franck’s fantastic vocals, however, there’s something that distinguishes the “Wall of Skulls” album – it is so much inspired and catchy! Every refrain, every verse, every part of the vocal melodies will blow your mind. We are talking about great hook lines, very catchy moments in every song, straightforward and infectious compositions, which show that the band hasn’t lost its songwriting skills and that its maturity proves to be very fruitful. From the first to the last song you will come across great melodies, ingenious song structures, monster riffs, an indestructible rhythm section, Andy B. Franck’s unique way of singing and an ideal sound production. Push play and the one thunderous moment comes after the other. We are talking about ten first class songs (plus an intro and a bonus track) – oh my god, they are all superb! My favourite song is “Glory Disappears”, which in my opinion, is the top moment of a glorious record! Yes, Brainstorm has the power and the passion, and that’s why the Germans are relentless and victorious!