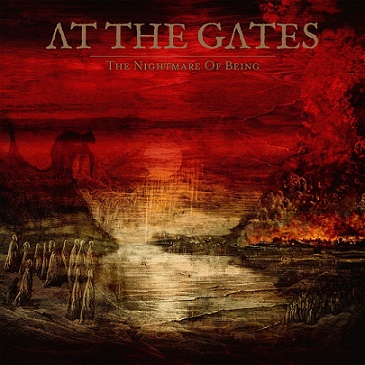 The masters of Swedish (and not only) death metal are back with a powerful record, which reminds us of what they are truly capable of. Following their sixth album “To Drink From The Night Itself”, it seems that the band is again on high form, presenting us again a very well worked piece, a collective effort to keep their high standards during this ‘second term’ of their existence as a band. “The Nightmare of Being” has no surprises. There is no re-inventing the wheel. Nothing to initiate discussions about the new, the unpredictable, the ‘new-born’. Everything that has made us love their sound and made us want to listen to their songs and albums is here. The trademark melody of the Gothenburg sound is emphatically present, however without any intention to be nostalgic, but showing us the forward thinking of its creators. This is such an influential band by all means and ways that there is no need to ‘go back’, but be inspired from the past and drive things onwards. There is also a flair of experimentation to their trademark sound, by incorporating elements, previously never heard (use of baritone saxophone on “Garden of Cyrus” or the gothic intro with the flute and other classical instruments on “Touched by the White Hands of Death”). I would not only say it an act of experimentation, but a statement of diversity, of openness and being progressive in the broad essence of the term. This is followed on “The Fall into Time” as well, a masterpiece by all means and probably my favorite track of the record. This is where the whole band absolutely shines! Riffs, melodies, solid mid-tempo rhythm sections, emphatic bass lines and charismatic leads and solos and of course the trademark death metal vocals of Tomas, all layered and blend in a unique and awesome result. There is not a single moment where the quality of the songwriting falls even to the minimal possible. There is this straightforward approach to the things, from a band which makes things look and sound easy, but what the heck, they are not! “The Nightmare of Being” highlights one of the best attribute of At The Gates: the perfect and harmonized blend of rawness, melody, aggressivity and the old school but progressive mindset. This record will be appreciated and enjoyed from their old followers but also from their newest audiences as well. It is catchy, progressive, in-your-face and it broadens the span of their capabilities. I would call it “Back to the Future”, if I was allowed to do so. Simply a brilliant album!