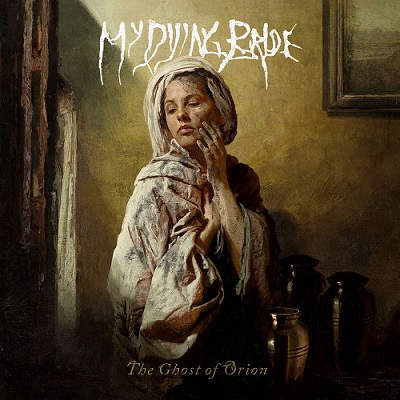 Upon hearing My Dying Bride’s music, a look of the grayish, foggy English countryside comes to my mind. From this imagery, emotions of melancholy and grief emerge, complementing the dismal landscape. MDB for 30 years express these emotions through their distinctive atmospheric doom / gothic sound, carving the path for many others to follow. Their music might be depressing and grim, but at the same time -despite its seemingly repulsive face- it’s emotional and darkly beautiful, like a dark chest revealing hidden treasures to those few who dare to open it.

My Dying Bride are highly respected and have formed a consistent fan base. However, five years have passed since “Feel the Misery” was released: that’s the longest gap between studio albums to date. Sadly, Aaron wasn’t available to write lyrics and record his vocals, as he spent many months in hospital due to his daughter’s illness and was close to the point of leaving the band. In the meantime, Craighan had to compose all the music, as Robertshaw left the band again (Neil Blanchett filled in for him), while a new drummer, Jeff Singer (ex-Paradise Lost), was hired, replacing Shaun Taylor-Steels. Amidst these plangent conditions and line-up changes, things went up slow. Eventually, “The Ghost of Orion” was released in March: that’s the first album under Nuclear Blast, after the longtime cooperation with Peaceville Records. We may consider it as a personal victory for Aaron, since his daughter won the battle and he found the courage to go on with music and participate in the album.

The band in recent years has ended up in a successful recipe which doesn’t alter substantially over time, including the return of the violin in “For the Lies I Sire” onwards, a transition that gave a more gothic orientation to the sound. In “The Ghost of Orion” My Dying Bride remain heavy and slow, with the classic, well-crafted doom riffage governing the lengthy tracks. However, this time Macgowan’s violin takes a more substantial role and becomes the protagonist at certain parts, intensifying the melancholy and giving a “silky” essence to the album. Of course, the doom element is still evident, but not to the point of being omnipresent, while their death aspect is restricted in Aaron’s growls.

Craighan has done an excellent composing work, interweaving splendidly melancholic guitar patterns with violin to create a gloomy heaviness that touches you with a silk garment of inner, dark beauty. He even uses whispering choirs or ethereal female vocals to create something ominous, or mysterious. The timely switching between intense, doom parts with atmospheric intervals is a crucial feature that maintains the listener’s interest throughout lengthy tracks. But if you ask me, which is the element that upgrades the album to a superior level, I would surely reply “Aaron’s performance”.

Stainthorpe, as years pass, has made noteworthy progress, becoming more and more expressive. This time, his performance is even more passionate and desperate, expressing his struggle and redemptive feeling when the torturous period ended. His way of singing, including clean lines and growls as well, is used in accordance and in perfect collaboration with the band’s patterns, subliming the album’s quality. Some clean lines bring in mind Holmes’ serene tone, giving light strokes of loneliness. However, his death growls make sadness and despair become unbearable.

Regarding songwriting, in the opener “Your Broken Shore” the easily memorable doom riffage and interplay with violin form a mournful theme, while Aaron’s swings between singing styles deepens feelings and captures our senses. “To Outlive the Gods” has a noteworthy melodic approach and exclusively clean vocals. “So Tired of Tears”, referring to Aaron’s daughter and her health issues, is definitely one of the most overwhelming, heartbreaking, desperate songs that the band has ever composed. It contains weeping patterns, while the lyrical content depicts clearly the psychological burden that Aaron had to deal with during difficult months.

In “The Long Black Land” we come across the most fruitful aspect of My Dying Bride’s composing ability. The song starts with the well-known depressing motif and gothic romanticism. However, the drums at the middle signify a new theme: a persistent riffing pattern that unravels its majesty gradually. Definitely, the second part might be the highlight of the album. “The Old Earth”, a classic My Dying Bride doom composition, features a melodic guitar intro that make an interesting contrast with the heavy riffs that follow. The dynamic rhythmic riffage ends the song in an epic, grandiose way: that’s an ending we have seen in other My Dying Bride’s albums in similar forms.

Despite the high quality standards of the more lengthy compositions, some elements could be more intriguing. Wardruna’s Lindy Fay Hella gives a spiritual essence to “The Solace” with her ethereal gripping vocals, combined with Craighan’s persistent riffs. The track is appealing and soft to the ear, revealing a hidden aspect of the band, but its 6-minute duration is rather excessive, given its plain structure. Similarly, the homonymous track is rather creepy, with its whispering vocals, but it could be more effective if it was used as an intro.

Overall, “The Ghost of Orion” communicates effectively the traditional My Dying Bride atmosphere, being dark, depressing and melancholic and balancing on the borders of doom and gothic territories. Indeed, it features all the elements that My Dying Bride fans adore. But we have to keep in mind that it was composed under difficult circumstances that tested the band’s resilience to the maximum. Above everything else, it’s a manifestation that conveys their thoughts and emotions of grief and pain and helped them to remain active and prevail. “The Ghost of Orion” is a dark gem worthy to come to light.