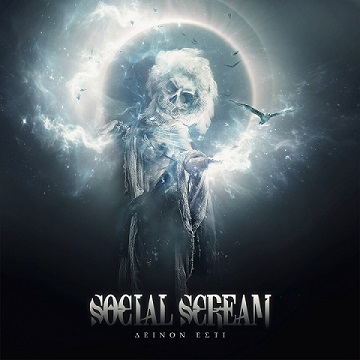 Social Scream, the heavy metal band from Sparta, Greece, has drawn our attention in the past with its latest albums, “Organic Mindset” (2020) and “From Ashes to Hope” (2021). The band started its career in 2008 and continues its way, getting better every day. The Spartans release now the “ΔΕΙΝΟΝ ΕΣΤΙ” album and it is not an exaggeration to say that this new installment is their best until now. Social Scream puts together a fine record, which contains eight interesting songs, made of excellent 90s heavy metal. Being inspired by bands like Metallica, Megadeth and Iced Earth, they carve a small gem of instant, straightforward and in-your-face heavy metal, with sharp riffs and catchy vocal lines. The songs have a complex structure, sounding sometimes dramatic, theatrical, and even epic. For instance, “Inmates”, “Frozen In Time”, “Luna Dark” and “Lost Angel Falls” are technical, guitar-driven compositions, with some strong melodies and an undeniable groove. Social Scream is a terrifying juggernaut, which shocks and destructs everything on its staggering, insane course! With “ΔΕΙΝΟΝ ΕΣΤΙ” they show what they are capable of, they exceed the expectations triumphantly and gift us an album, which sounds so mature, so wise and unique. What I didn’t like in their new effort is the production, which should be clearer, more precise. Yet, the whole result of the band’s songwriting genius will make you overlook the details and focus on the most important – the charming beauty of the album’s compositions! That’s how Social Scream won the battle!