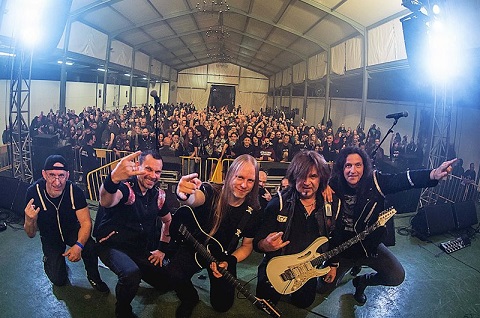 Scanner is back, with a new record contract, as they signed with Rock of Angels Records!

The legendary German power metal band evolved from the band LIONS BREED (album "DAMN THE NIGHT", Earthshaker Label/Mausoleum Records) in 1986. Their line up at that time consisted of Michael Knoblich (vocals), Tom S. Sopha (guitar), Axel A.J. Julius (guitar), Martin Bork (bass) and Wolfgang Kolorz (drums). SCANNER's concept albums based off of the fascinating science fiction story of the same-named fictional figure. Axel A.J. Julius, studying astronomy at the time, and Michael Knoblich, a passionate model builder, were big fans of SF when they invented the figure of the SCANNER back in 1987. This character was to illustrate the main focus of the band: Science-Fiction, fight against war and warmongering, political structures with view of the current problems of development and peace policy and the historical, human development in this context. Six full-length albums, countless live shows and several line-up changes later, the band is stronger than ever, ready to unleash its seventh offering to the world of Heavy Metal soon!

Today we proudly announce the signing of a multi-album deal with SCANNER and welcome the band to the ROAR! Rock of Angels roster.