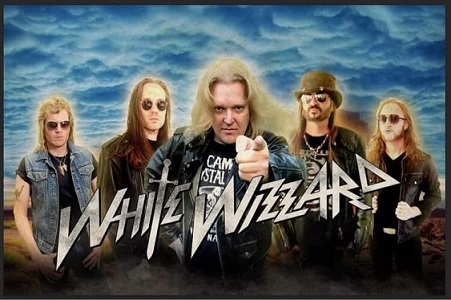 Jon Leon, bass player and founder of White Wizzard, says: "I'm super excited to welcome Giles Lavery to the White Wizzard fold as our new lead singer and also as it happens... our worldwide manager. As a manager Giles has built up a steady roster and proven himself to people in the industry worldwide as a solid dependable person that gets shit done... after that, as we searched for the right singer, coupled with my listening deeply to his last band he sang for called Dragonsclaw, and seeing what I feel is so much potential in him, I offered him the lead vocalist role. I feel, merged with me as a writer... that he can ascend into a world class frontman and bring us into the stratosphere, It’s a perfect pairing both musically and professionally. He is a pros pro and that’s what WW needs on the mic. We have been a band that, though we have had 4 world class well reviewed and revered albums released, has gone through a bit of madness and hell, and we have lacked a manager that was a true professional with vision, and Giles I believe has what it takes to fill that void to complete the circle for us to finally realize the goal of this band I set when I formed it in 2007. I have remained the consistent sole songwriter of this band in spite of our setbacks, and I’m writing the most smoking inspired material of my life right now, our guitarists are also contributing more. To that end we are armed with what I feel is the best 2 lead guitar tandem in our genre right now in original member and most underrated guitarist James J LaRue and the complementary blistering fire of Will Wallner... In a couple years those guys will be more respected worldwide I can promise you that. And let’s not forget our other new addition Jonathan Brown on drums. He looks like the love child of Ginger Baker and he plays efficient and energetic with glistening red testicles of steel. We plan on releasing albums until we drop dead... and we are on a mission. This band was started for one reason, that being; musical passion. This is a line up of good guys that I'm confident will not let the fan base down like the past, be it pulling out of tours last minute or choosing addictions or ulterior motives over the fans. That won't happen with this group of people. And in the words of the late great genius Norm Macdonald - Don't do crack…".

And Giles Lavery adds: "I am very excited to get back to doing what got me into this business in the first place, and that is singing, although my management business is thriving and will remain a focus with my great team there , i remain first and foremost a singer and musician… To give an example, as much as i admire Rod Smallwood, i had a picture of Bruce on my wall as a teenager not Rod! We are now going to get busy with the new White Wizzard tunes and I'm currently getting up to speed with their catalogue, of course which I am a fan of... I was singing "Kings Of The Highway" just today! I am thrilled to be a part of Jon's vision and appreciate the faith he has put in me."