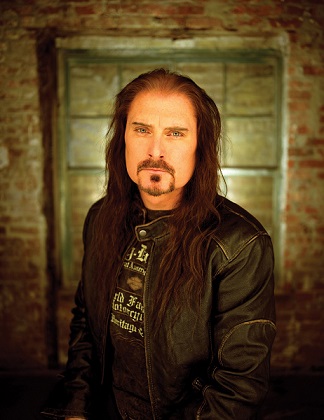 James LaBrie, the frontman of Dream Theater, has chosen "Beautiful Shade Of Gray" as the title of his new solo album, out on May 20th, 2022 via InsideOut Music. This new effort was tracked with Scottish musician Paul Logue, bassist and founding member of the multinational melodic hard rock/metal band Eden's Curse.

But how did LaBrie's cooperation with Logue came about? LaBrie explains: "I sang on one of Eden's Curse' s songs back in 2010 called 'No Holy Man'; so I guest on that. And I really liked Paul's writing. To me, Paul's writing was more from a classical era — like the '70s; that classic rock approach. And I had a lot of ideas in that vein ... Paul and I actually bumped into each other — you think fate isn't there with you; holy shit… The day after we finished the show — Dream Theater in Glasgow [on] February 23rd [2020]. I'm waiting for my flight on the 24th to go to London and then Toronto, and Paul walks by me and he goes, 'James!' I'm, like, 'Oh my God!' He goes, 'You know I was at the show last night.' He kept trying to e-mail me on my old e-mail address. And he goes, 'Listen, let me know. You wanna get together? You wanna do some writing?' And I said, 'I'd love to.' At the time, I said, 'I don't know. Some freaky shit's going on. You're hearing about this virus?' 'Yeah. Yeah.' [I said] 'We've gotta go to Asia, then we've gotta go to freakin' South America and North America and all that.' I said, 'So we're probably not gonna be done till October, but why don't we start writing then? Or why don't we start throwing ideas back in the meantime, and I can even be on the road and working on it?' And he goes, 'Great.' All of a sudden, the world closes down. So we got on it… It was probably… Everything closed down March 15th, I believe, and by March 20th, him and I were already passing ideas back and forth."

The last James LaBrie solo album was "Impermanent Resonance" (2013), which was written and recorded with Matt Guillory.