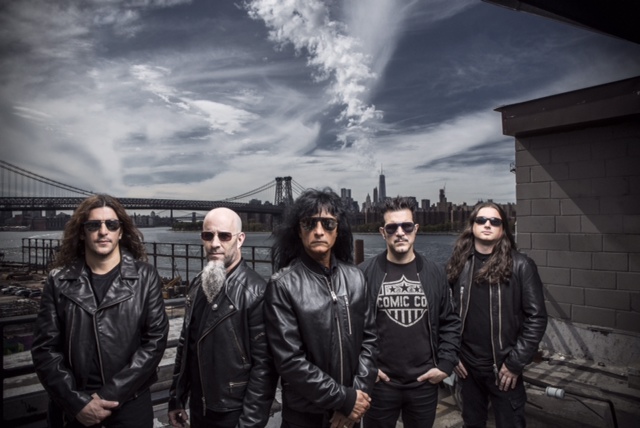 The celebrations for the 40th anniversary of Anthrax are about to begin and we can now share the details (press release follows):

Active over the past five decades, Anthrax have released 11 studio albums, toured the world since 1984 playing thousands of shows. The band has built a strong reputation with fans as well as the record industry. With the lineup including Scott Ian, bassist Frank Bello, drummer Charlie Benante, singer Joey Belladonna, and guitarist Jon Donais, the band is being feted on their 40th anniversary by a wide range of friends and music contemporaries.

Each week beginning May 3, on Mondays, Wednesdays, and Fridays, and wrapping on the band's official founding anniversary of July 18, Anthrax's social media accounts will offer a series of video testimonials sent in by former band members, fellow musicians, colleagues, and industry veterans sharing behind-the-scenes stories of working with the band and what Anthrax's legacy has meant all these years on. These videos will honor each album in chronological order beginning with the original release, Fistful Of Metal.

The finale will come as a very special Live stream performance from Anthrax on Friday, July 16th, featuring a deep cuts set that will pull from the band's entire career-spanning catalog. All details including ticketing information will be announced shortly.

Statement from the band: "The idea of putting 40 years into context was just too much for the 5 of us so we asked our friends if they'd help out. And they did. Starting Monday May 3 with Fistful of Metal week we'll be posting new episodes of this doc every Monday, Wednesday, Friday.

"Spreading week starts May 10, Among starts May 17, Euphoria May 24, and so on until July 18, our 40th. On July 18th weekend we'll be playing a show - a massive show unlike any we've ever done. Stay tuned for ticket info for that and have fun watching every week!".