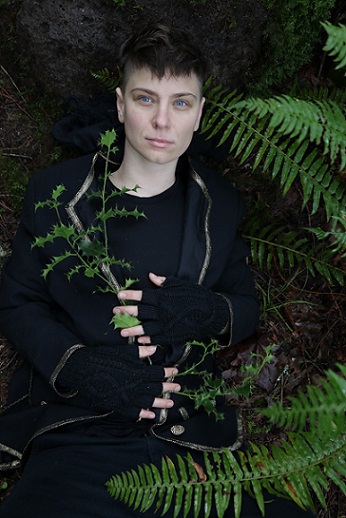 "Versatile", the upcoming album by A Stick And A Stone, marks a turning point for transgender vocalist/composer Elliott Miskovicz. Diverging from the heavy doom-shaded opus of their previous release, "Versatile" is a vivid experimental album of haunting love songs intimately home-recorded in remote forested hideouts. The Obelisk debuts the opening track, “Husband of Wind”  from the album. The track is available on all digital platforms. Stream it here: https://theobelisk.net/obelisk/2020/12/15/a-stick-and-a-stone-versatile-husband-of-wind-premiere/
Elliott Miskovicz explains:
“As a song about the element of air, I really wanted to record 'Husband of Wind' on the pump organ, an instrument that really breathes with its whole body. After searching for almost a year, I finally found a church that would let me record on theirs with no one around. I wrote this song during a time when I was dealing with relentless panic attacks, and when becoming more conscious of breathing was a constant process. This song is one of the most challenging to play on tour, because I play organ with one hand and bass drum with the other while singing harmonies with Billy Ray. Meanwhile, Billy Ray sings the vocal harmony while simultaneously playing their viola part which harmonizes with Myles and Stelleaux's string parts. In this recorded version, I appreciate how much fuller David's drumming sounds, along with the deep undertones of the pump organ.”
"Versatile" comes January 15th on cassette and digitally via Anima Recordings. Blast First Petite (UK) will issue the vinyls when the peak of the plague passes, and everything becomes viable again. 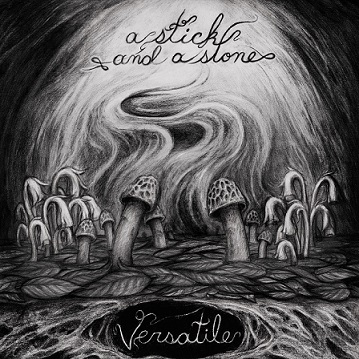 Formed in 2007 by transgender vocalist/composer Elliott Miskovicz, A Stick And A Stone crafts dark, minimalist, choral-ridden song-spells laced with ambient field recordings and poetic imagery. After a decade of Miskovicz touring the underground circuit as a solo artist while recording with a steady flow of guest musicians, A Stick And A Stone expanded in 2015 to include core collaborators Billy Ray Boyer (Aradia), Stella Peach (Sweeping Exits), Myles Donovan (Disemballerina), and Sei Harris (Mind Parade). Performing as an openly trans and disabled artist, Miskovicz’s work sheds light on the unseen and unheard, calling out to mysterious forces with vital inquiries into surviving and restoring our often fractured world.

"Versatile", the upcoming fourth album by A Stick And A Stone, explores the versatility of queer love with songs for friends and freedom fighters, woodlands and waterways, trans ancestors and survivors. Diverging from the heavy doom-shaded opus of their previous release, "Versatile" is a vivid experimental album home-recorded in remote forested hideouts. While the thread of A Stick And A Stone’s lush, ethereal vocals and minor-key fervency endures, off-kilter compositions of harp, layered strings, pump organ, found sounds, and crystal glass breathe new organic life into the band’s distinctive sound.

Written after Miskovicz’s relocation to living off-grid in the woods after a lifetime in the dense Philadelphia area, these 11 songs follow the journey of the sacrifices we make in the name of solace. When multiple health conditions began exacerbating in urban environments, it became imminently necessary for him to relocate to quieter landscapes. Although rural life was not always easy as a transgender gay male, his songwriting there evolved from a tool for coping with chaos into an expression of reverence for the ecosystems surrounding him.