ON is a power trio made up of Lucy Di Santo (vocals, bass), Dan Cornelius (drums) and Steve Fall (guitars) - carrying on the legacy of their former 90's band - the Sire Records-signed Acid Test - with members also having been in other popular Toronto bands Danko Jones and Deliuss.

Lucy Di Santo says, "The song 'Break You' soars like a goodbye love letter to a toxic person, place or substance; it’s a decree of emancipation - and breaking away from what dictates and captures the human soul. It is an outcry, a battle cry, and finally a freedom cry of intention - all wrapped up in a hardcore punk-metal riff that end with Sabbath-esque overtones."

Earlier, ON released the singles 'Blackmail' with video directed and edited by Michael Gucciardi and 'Underdog' with lively video filmed by Lindi Gordon and edited by Gucciardi. With these singles and focus track 'Hereafter', the band has charted in the Radio Indie Alliance charts consecutively over the past half year.

Written in Toronto and New York, ON guitarist Steve Fall says the 'ON' album is "a document of friendship navigating explores in pain, and hope. Looking at the world with a collaborative effort to document what we see, witness and feel through songwriting and chemistry as a band." Following pre-production recording with Drew Howard at Star Sound Studios in Cape Coral, the band worked with sound engineer Darius Szczepaniak (Sum 41, Black Crowes, Big Sugar, Bare Naked Ladies, Jann Arden) out of Phase One Studios.

No stranger to touring North America, the band are once again gearing up for a West Coast tour that will bring them to dozens of U.S. cities after a successful Ontario tour in 2022. This string of shows is scheduled to kick off in San Diego on February 14.
The full 'ON' album is out now and available everywhere online, including Spotify, Apple Music and Bandcamp. It can also be ordered at https://indiestructablerecords.com.

Prog metal heavy weights Redemption have released a new, melodic anthem, "Seven Minutes From Sunset", off their upcoming album, "I Am The Storm", out on March 17th, 2023, via AFM Records.

Following the band's recent announcement, to release their forthcoming, eighth studio offering I Am The Storm on March 17, 2023 through AFM Records, today, Los Angeles-based progressive metal masters Redemption have unleashed a brand new single! By the end of 2022, the band already shared a first album foretaste with a music video for the colossal album title track I Am The Storm.
Band mastermind Nicolas van Dyk reveals: “If I Am The Storm showcases the heaviest aspect of Redemption, Seven Minutes From Sunset showcases a more melodic metal current of prog metal, as Someone Else’s Problem did on our last CD. As for the lyrics…they’re a metaphor. For the listener to decipher.”

As the album title already promises, I Am The Storm is a gripping, stirring, overwhelming and dramatic, new record by the power prog metal act. Combining unapologetic melodies and hooks with technicality, complexity and thundering riffs, Redemption once again occupies a unique place with its powerful, heavy, intelligent and deeply emotional music.

I Am The Storm was produced by van Dyk, Vikram Shankar and sound engineer/guitarist Simone Mularoni (DGM), who – alongside Chris Poland (ex-Megadeth) and Henrik Danhage (Evergrey) – will be also featured as a guest musician on the album. The new Redemption record also contains two cover songs, 'Turn It On Again' by Genesis and 'Red Rain' by Peter Gabriel. 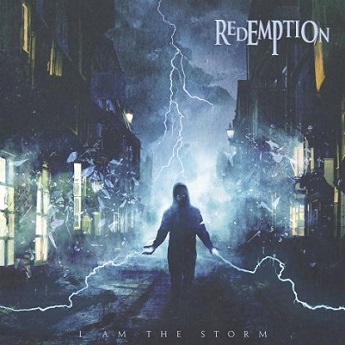 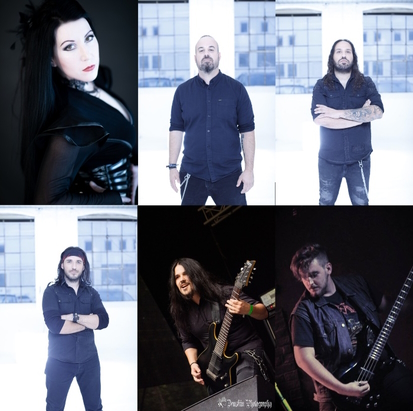 Greek symphonic metallers Fallen Arise return, with the announcement of their new album, which is on the making! A promo video is available. Gus Dibelas, keyboard player, checked in from the studio:
"Hello everyone! We are really proud to share with you that we have already started the creation of our next album! We look forward to its development and of course to see you on the road in 2023! Many thanks to Lizard Sound Studios and Dimitris Karpouzas for the hospitality!".

Fallen Arise released their latest effort "Enigma" in 2020, get your copy at https://smarturl.it/enigmafallenarise

Fallen Arise were formed in 2009, combining a theatrical atmosphere with a progressive approach and a heavy-metal-alike heaviness. So far, FALLEN ARISE have toured across Europe and Russia with established acts including: Nightwish, Fates Warning, Paradise Lost, Destruction, Sepultura, Skindred, Moonspell, Serenity, Leave’s Eyes, Xandria, Katatonia, Pain of Salvation and Insah.

WormHoleDeath Records has announced two new signings, Hurricane On Saturn and The Flying Caravan. Below you can find all the interesting info.

Italian electronicore outfit Hurricane On Saturn signed with Wormholedeath a licensing deal for their album "φnx", set to be released on February 24th, 2023.

"We are very glad of this sudden and great opportunity to have Wormholedeath Records as a partner and companion on our journey through the boundaries of the unknown."
The second album “φnx” promises to explore further the madness outside of the boundaries of musical styles with even a darker and filled anger attitude.

Hurricane On Saturn arose in 2019 in central Italy from the middle of nowhere with their unique "out of genres" approach combining pure epic EDM, larger-than-life rock, razor-sharp metal, rap, furious post-hardcore with memorable melodies, strongly recognizable visual imagery, and inimitable style of lyrics. The mysterious quintet known only as Dakm [Vocals], Maydx [Vocals], Antares [Guitars], Rastaban [Bass], and Marakk [Drums] struck the hard rock scene with the self-produced debut album “Killing Field'' (2020) mixed by Evan Rodaniche (Cage9, Powerman 5000) receiving critical acclaim and described as a proposal out of any classification based on a never heard before mix between classic and modern influences.
During 2021 the band published three brand new singles titled “Outsider”, “Crumbs'' with the participation of Hugo Ribeiro (Moonspell), and the last one "Dust Devils'' mixed at Studio Fredman with the legendary metal producer Fredrik Nordström.

In 2022 Hurricane On Saturn sets its return to the scene in its own way with the new controversial hit “Monsters” featuring Deuce (Hollywood Undead, 9lives) and announces the signing of a record deal with WormHoleDeath Records for the release of the second album “φnx” and confirming its participation in the bill of Pannonian Rock Fest the main Croatian metal festival in summer 2023.

The progressive rock band from Alicante (Spain) The Flying Caravan has signed a contract with the Italian record label Wormholedeath to re-release their double album “I Just Wanna Break Even”, recorded in 2021.

The influence of classic bands like Camel, Pink Floyd, Kansas, Be Bop Deluxe and new prog bands like The Flower Kings, Karmakanic, and Transatlantic, and musicians such as Roine Stolt, Neal Morse, and Jonas Reingold becomes evident with the sounds of progressive and classic rock being present throughout the six tracks of the record and thus creating the proper atmosphere for the development of the band´s music.
The group has received very positive reviews for their recording debut on several specialized websites, being broadcasted on worldwide radio stations and appearing in many “2021 best album” lists.

Born in Alicante in 1970, Antonio started playing the guitar at the age of 13 with Mark Knopfler as his main musical influence and assimilating the fingerpicking style as his own.
Since the age of 18, he has been learning modern techniques and harmony with different guitar teachers. As an avid record collector, he devours all types of music from bands and styles he gets acquainted.
With his first band, Yeomen, he performed live for the first time while gaining influence from bands like Camel, Jethro Tull, Kansas, Pink Floyd, Genesis, and Yes, and musicians such as Andy Latimer, Martin Barre, David Gilmour or Bill Nelson.
Antonio was one of the founding members of the group Numen in 1972 with whom he recorded two albums, “Samsara” (1998) and “Numenclature” (2014), as well as the DVD "Numenclature-Un viaje en progresivo".
Since 2000 he has been a member of the bands Malatesta Bier Band, Whiskey con Yoda, The Worms, and Kamikaze Sound Express with whom he has played a variety of styles.

The Flying Caravan - “I Just Wanna Break Even”

From that year onwards, he focused on the idea of developing his own compositions to record a double album. When Juanjo Sánchez (keyboard) joined the project in 2004, all ended up as The Flying Caravan.
However, the turning point for the project took place when Izaga Plata (vocals) joined it. It was then when she and Antonio developed the vocal melodies and the lyrics for the record.
With the entry of Pedro Pablo Molina (bass), Lluís Mas (drums), and the return of Juanjo, the project became established.
The band recorded their first double, “I Just Wanna Break Even” in Altea between March and August 2017 with the help of some good friends and great musicians.
The recording of The Flying Caravan was made in the studio of the Miguel Hernández University, in Altea, with Daniel Montiel as the sound engineer, audio mixing and mastering process, with Lluis Mas in his studio in Alicante, and Antonio Valiente and Lluis Mas as the producers of the album.

After a two-year lasting production, during which keyboards and percussions were added, the album was finally released on January 11 2021 displaying the collaboration of Manolo Salido (sax), Juan Carlos Aracil (flute), and Jorge Aniorte (vocals).
The album cover has been designed by the outstanding illustrator Mario Domínguez.
The band, headed by its guitar player Antonio Valiente, has undergone changes in its original formation. New singer Julia Novecento and keyboardist José Hernández have recently joined the band. Drummer Lluis Mas and bass player Pedro Pablo Molina continue in the band from the beginning.