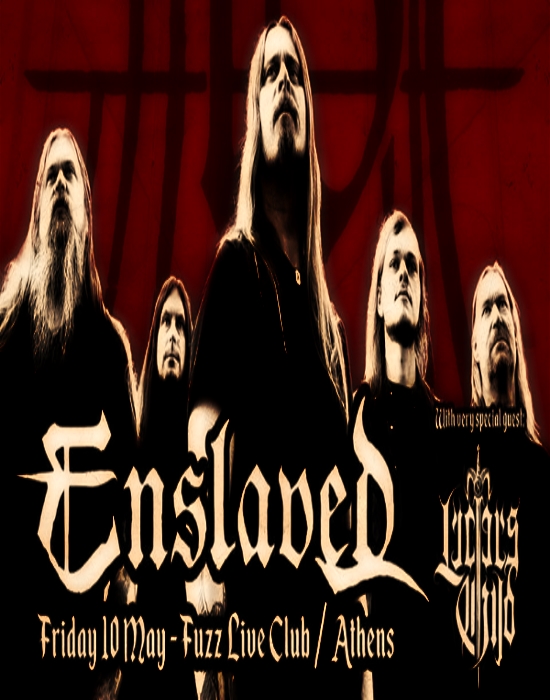 Friday, 10th of May 2019, was marked as a day of (almost unbearable) anticipation, since Enslaved, for the very first time in their career, would perform (at last!) in our humble city. Indeed, 28 years were too much, especially for us, the older fans, who watched how their music evolved drastically over time, defying normality and embracing paradox reality. As one may conclude, expectations were extremely high, concerning both their on-stage performance and the setlist, since all of their 14 albums (many of which are considered as masterpieces) are almost impossible to be included in one concert. Let’s see what happened that historic night.

The Norwegians were supported by Lucifer’s Child, a promising Greek black metal band, formed 6 years ago by George Emmanuel (ex-Rotting Christ) and Stathis Ridis (Nightfall). Starting their act on time, in front of a few people though, they showed from the very first moments that they have worked a lot in the rehearsal studio, performing confidently their songs, mainly from their second album (“The Order”). Their music, influenced by the Swedish black metal, and bearing some technical patterns that surely draw interest, was performed precisely and in the right mood. Lucifer’s Child are a new band, with few live shows only, but the experience of Marios Dupont (a well-known vocalist due to his excellent work with Karma Violens) and George (after 7 years on the road with Rotting Christ) was the catalyst for an intense, crushing show. However, despite their admittedly good efforts (especially by Marios), the reaction of the audience was not what the band would expect. The gripping “Haraya” and the hellish, addictive “The Order” were absolute highlights, in a performance that was the appropriate “appetizer” of what was meant to follow, no matter the audience’s rather cold reactions.

Fall of the Rebel Angels

Through Fire We Burn

He, Who Punishes and Slays

A few moments later, and contrary to my initial fears, the attendance became quite satisfying. Without significant delay, one of the strongest desires of the Greek audience appeared in front of our eyes and then the time stopped, revealing an alternate reality of Norwegian black metal and prog/space psychedelia. The first riffs of “Ethica Odini”, greeted by everyone’s screams, filled the air and signaled the start of a journey that would last for almost two hours. The opus “Roots of the Mountain” was performed with all its magnificence and intensity, while “Ruun” and “Ground”, taken from their middle period, revealed the band’s expertise in playing like a well-tuned clock all their complex patterns with high precision and ease.

Soon, the late prog era was succeeded by a deep dive into the early roots of Enslaved. The cold, crystal-like intro of “Frost” led to three consecutive songs from that brilliant album: “Loke”, “Fenris” and “Isöders Dronning” caused awe, shivering, excitement, violence and -above all- admiration for a band that is able to change at will musical skins like a chameleon. These opuses were performed as the Norwegian black metal of the 90s commands. They were Cold. Sharp. Raw. Remorseless. Like then, when everything started in that Nordic country.

After that freezing hell, the band rose to the surface again, visiting “Below the Lights”, an album that became a turning point in its long discography. “As Fire Swept Clean the Earth” and “Havenless” transferred us to an alternate dimension, without disrupting the coherence of the concert. The latter was ritualistic, majestic, invocatory, something we will always refer to. “Storm Son” and “Sacred Horse” followed from their last highly appraised album, filling the air with their elegant parts.

The encore led us to the addictive riffing of “Isa”, while the end was a huge leap to the very first era; “Allfǫðr Oðinn” from the monumental “Hordanes Land” was the perfect, dark, frozen closure of a concert that will remain as a brilliant example of excellence in the years to come.

It was evident that the Norwegians came to compensate us fully for their absence all these years and they fulfilled their mission. Their performance, either in aggressive or progressive and more technically demanding songs reached high levels, revealing expertise beyond any doubt. Grutle remained communicative, kind and humorous throughout the whole concert; Ice Dale was perfect in his guitar work and Håkon colored vividly the songs with his touching, clean voice. As for Ivar, he was the benign, gracious Viking giant who controls everything. Enslaved honored us with a 2-hour show, paying respect to their early and later era and satisfying all fans alike.

Roots of the Mountain

As Fire Swept Clean the Earth